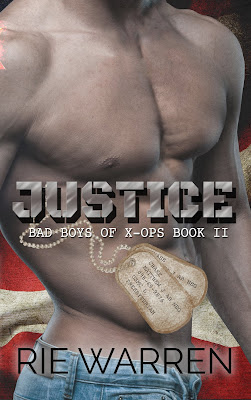 Let’s face it. I’ve got a bad rep with the ladies. I’m a rough-talking, smooth-loving, international playboy—yeah right, whatever—and an X-Ops specialist. Sure, I’m hiding a secret or two. Who isn’t? That’s the least of my concerns when I’m called in to lead an infiltrate-and-retrieve mission.
I’ve got my head in the game—the one firmly attached to my shoulders. An American embassy overseas is under siege, and I’m expecting to rescue the ambassador and his daughter, a stereotypical geeky damsel in distress, Matilda Lawless.
Caught in the crossfire between explosive danger and wild desire, I’m in for the shock of my life.
TILLY

I’m not looking for any man to save me. I’m pretty damn capable of taking care of myself, thank you very much. I have a successful career and was practically born and bred on a gun range, even if I can’t bake a perfect biscuit to save my life like a good southern woman should.
But there’s just something about that hardcore operative called Justice. He’s haunted and lonely, and I know that pain inside and out. It doesn’t hurt one little bit he’s been blessed with more than his fair share of good looks, plus a body that would make any red-blooded woman drool.
Barricaded inside the embassy, under my father’s shrewd eyes, I intend to have Justice no matter how many times he says he’s not good enough. I see the way he watches me. With dirty, sexy, hungry lust.
Fighting is what Justice does. Now I need him to fight for me.
Warning: Graphic sex, graphic action, graphic language. Triple X caution. 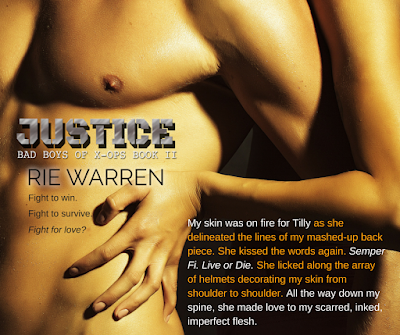 “I think you’d best get some rest, Matilda.” My voice came out low but razor sharp, my words blunt and unmuffled.
If I had to be an asshole to her to maintain the necessary distance I would, because the suddenness of wanting her so damn much was painful.
And futile.
And stupid beyond belief.
“Tsk.” She waltzed into the room all bare, tan legs and warm, soft scent.
Her fingers flicked at my forehead, and I reared back in surprise.
“Tilly, Ah told you. Only my grandmother has ever called me Matilda, and she’s so stiff I think she was molded into the apron she put on after she got married in 1948. I am not a Matilda.”
First of all, I couldn’t believe she’d flicked me. Me! A goddamn ex-marine and special operative.
And second, a grin crept up one side of my mouth, but I swallowed down the laugh that wanted to follow.
“What’s that?” Tilly pointed at the notebook resting in my lap.
“Uh.” Fuck. I’d completely forgotten about the damn thing. “Nothing.” I quickly rolled it up and stashed it in my pocket. “Bullshit on pages. Gonna make a bonfire out of it later.”
I pulled out a throwing star I always flipped back and forth between my fingers. It flashed like lightning, throwing sparks of light across the room.
A much more manly pursuit.
Jesus. I am losing it.
Maybe I need some sleep after all.
I groaned.
Tilly plopped right down beside me with upraised legs, leaning the back of her head against the wall. “God, but it’s hot in here.”
Plucking at her shirt that ballooned before settling back against the firm round hills of her tits, she rolled her head toward me. “Justin, right?”
I met her eyes for a moment to see the twinkle in her irises.
“Justice.” I growled.
“Justice? Hmm. Justice what?”
“I’m not giving out that information.” I made my frown as formidable as ever, but I could tell she didn’t give a shit.
She leaned close enough her warm breath caressed my ear. “Who would I tell?”
“Chase . . . Justice Chase.” The words tumbled from my mouth.
She clapped a hand over her mouth to withhold a giggle. “Well, that’s not so bad, is it? Imagine if it was Chase Justice.”
“It’s not that.” Maybe a little. “No one’s supposed to know . . . who I really am.”
“Lawless and Justice, huh?” Her hand found my forearm, and her fingers squeezed the steel cable muscles. “Sounds like an outlaw movie. The next big blockbuster. I promise to keep your secret, Justice Chase.”
Spunky Tilly somehow lifted all the fatigue from my body, and I aimed a feral grin at her.
Her eyelashes fluttered. Her smile became a softer curve of her lips.
Her fingers traced all the way down to my wrist where a pulse pounded a heavy beat before she skimmed her hand to my thigh and down to the floor between us.
She made my body thump and my blood race. She made sensations fire like a network of heat to the center of my groin.
Maybe it was just the day, the night, the adrenaline rush that hadn't worn off and probably wouldn't. The same thing happened with every op—unleashed energy I usually slaked afterward by fucking. Fucking hard. Randomly. Anonymously.
Here there was no one to screw. Except Tilly.
There was no escaping her presence either, and, man, did I want to fuck the living daylights out of her.
I lifted one knee and casually—oh so casually—crossed a forearm over it so my hand nearly dangled in my lap, obscuring my growing hard-on from view.
“You should stay in your quarters, Matilda.” My voice sounded like gravel, and I shifted again.
“Is that a direct order, sir?” 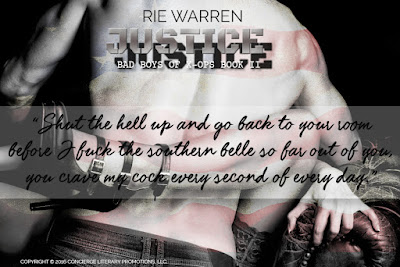 Rie is the badass, sassafras author of Sugar Daddy and the Don’t Tell series–a breakthrough trilogy that crosses traditional publishing boundaries beginning with In His Command. Her latest endeavors include the Carolina Bad Boys, a fun, hot, and southern-sexy series.

You can connect with Rie via the social media hangouts listed on her website https://www.riewarren.com. She is represented by Saritza Hernandez, Corvisiero Literary Agency. http://www.corvisieroagency.com/Saritza_Hernandez.html