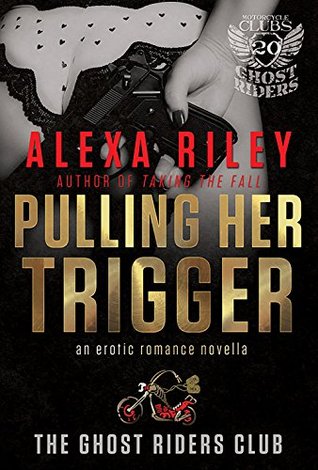 I thought I had all I needed: my gun, my chopper, and my brothers. Most women don't crave a life like mine, but after the things I've done and seen, I never thought I longed for more.

The Ghost Riders Motorcycle Club is my family and I'll bleed for them. I'll do anything to keep them safe, even if it's from me.

One look from him and everything I fought to hide was ripped wide open. Being an FBI agent gave him the power to flip my world upside down, and he did it in a way I never saw coming.

What happens when an FBI agent becomes more obsessed with you than with his case? Do you let down your guard? Or pull the trigger?

Warning: This book contains a heroine who doesn't submit, a hero who fights for what he's claimed, and insta-love so hard it will dent your kindle. *not responsible for dented kindles*

Pulling Her Trigger is a complete novella. No cliffhangers. No alpha-hole. No cheating. HEA. STANDALONE.

This was nothing like I that it was going to be at all. My first time reading something from Alex Riley that really threw me for a loop. I was amazed at how well they could write a story like this.  They really took the characters for a ride of there lifetime, being completely different then most MC romance stories I didn't know how to feel but at the same time I was really happy to read something about a female being part of an all male club.  Casper is this hard as nails all female, hard core biker chick that is sweet and whole at heart only wanting to do what's right even if that right will make it all wrong in the end. Badass doesn't even begin to cover her at all; she's this female with a lot of bite and doesn't take any crap from anyone including an FBI agent. Vincent the FBI agent that is all alpha all the time, finds his one true love and now the only thing to do is make sure she stays just that his TRUE LOVE. I do have to admit the way he went about capturing her heart was creepy but in the end it worked out for them. This is a great short story for a MC novel, racy, full of hot sex and it's defiantly one of a kind. only a few things made to stand out, a female in the MC  as a sister/brother however you want to look at it, just doesn't happen, the stalking what the hell is the FBI agent thinking I mean hello that's really breaking the law. I enjoyed the story and really liked all the characters I know I can't wait to see who is next or what is next, it says that's it's not a cliffhanger oh but does it feel that way. Short and sweet right to the point, fast pace read from cover to cover. Makes the shock of it all totally worth it and the WTH moments even better. Normally the fast pace only takes me hours to read this one took me a few days, some parts just didn't really care for.